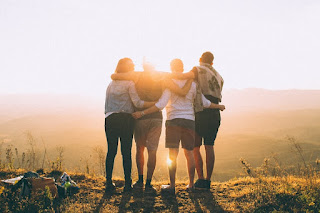 All of the Songs of Ascent focus on going to the house of the LORD and gathering in the city of God, but it is Psalm 122 that is often quoted with the command “Pray for the peace of Jerusalem!” We hear and repeat this refrain often when there is trouble in Israel, when there is conflict or threats of war, but what is the peace that the psalmist desired and what is the peace that God has promised? Are we praying for rockets to cease, for peace in the land or peace in their hearts, for peace with their enemies or peace with God? If we are going to pray verse six rightly, we are going to have to consider the psalm more fully.

This is the first of the four Songs of Ascent that are attributed to David. It begins, “I was glad when they said to me, ‘Let us go to the house of the LORD!’” The Hebrew word that we translate as “glad” in this verse is used often in the Old Testament, 158 times within 148 verses, but it is most often translated “rejoice”. It is not a feeling it is an action, it describes laughter and delight, it is the word “Samah” and it is literal meaning is “to brighten up”. David wrote that the opportunity to go the house of the LORD changed his countenance, lifted his spirits, it ministered to his heart. There was something medicinal, not just about going to God’s house or into God’s presence but going together.

That might be the under emphasized part of verse one. David did not just write that he was glad to go to God’s house, but that he was glad “when they said to me, ‘Let us go . . .’” The house of God has always been about His people meeting with Him together. We were created not only for relationship with God but for community with each other. God gathered Israel at Mount Sinai so that He could speak to the nation, all of them hearing His voice together, all of them experiencing His presence together, all of them being able to say, “God has met with us”. We will get to it later, but Psalm 133 teaches us that there is an anointing that is only possible with relationships of unity. Jesus taught that our witness is most powerful when our love for each other is on full display (John 13:35) and that God’s presence is most tangible, most evident when we call on Him together (Matthew 18:20). The gladness is not simply about going to God’s house, it is going to God’s house together. There is joy in fellowship.

Consider for a moment not when David wrote these words, but when Israel sang them. It was not just when they were on their journey, it was also when they were far off in exile. These songs were used, not only on the days of travel, but in the years when travel was impossible, when the temple had been destroyed, when all Judah had was the promise that they would one day return to Jerusalem and that, even beyond that, one day the Messiah would come. Imagine the exiles, returning after 70 years in Babylonian captivity, singing to each other, “I was glad when they said to me, ‘Let us go to the house of the LORD!’” They knew the temple had been destroyed, but they also knew that they were on their way to rebuild it. Consider Nehemiah, hearing this song in his heart, possibly singing it to himself as he saw the broken-down walls and burned gates of the city he loved. This psalm is not just an invitation to “go to church”, it is not just a call to worship, it is a promise of redemption and a reminder of God’s faithfulness.

But it may be even more than that. David wrote, “Jerusalem—built as a city that is bound firmly together, to which the tribes go up, the tribes of the LORD, as was decreed for Israel, to give thanks to the name of the LORD.” In Exodus, Leviticus and Deuteronomy the LORD said that the festivals were to be celebrated by all in the house of the LORD. When Israel remembered the Passover, they did it together, in Jerusalem. When they celebrated the first fruits, they did it together in Jerusalem. When they commemorated God’s care for them in the 40 years in the wilderness, they did it together, in Jerusalem. They did not gather to say, “God has been good to me”, but “God has been good to us”. These celebrations were not just reminders of what God had done, but of who God is—they were celebrations of His holiness, His faithfulness, His righteousness and His love. God required that Israel celebrate, remember and worship together because He refused to allow them to become self-centered.

I know a lot of people that are not selfish but are self-centered. They are generous in their giving, faithful in serving, but lacking in gladness. It is hard to be glad when we are focused on ourselves. We tend to think our problems are larger than they are, that we are alone in the issues that we face, that we are somehow being left out or left behind. Jealousy sneaks in, discontentment becomes a companion all because the fellowship we were created for, that gives us hope, strength, joy and life has been neglected. God in establishing His people gave them no room to have a “personal relationship” with Him, He invited His people to know Him, love Him and serve Him together, in His house, in His city, in His name according to His Word. Every promise belonged to them together. Every hope was shared. Every joy was corporate. Every grief was carried together. Every failure was dealt with as a whole. They were not God’s many chosen people, they were His One nation, chosen together by His love and for His glory. Long before Paul wrote to the church, Israel was one body with many members. Worship was an act of fellowship where God’s people met with Him together.

Verse five is where much of what came before and what comes after hinges, “There thrones for judgment were set, the thrones of the house of David.” Israel gathered together not only to remember what God had done, but to never forget what God had promised, the Messiah would come. Corporate worship was not about personal needs, hopes or desires, it was about the glory and majesty of God, and it was always to concentrate on the hope of the Messiah. Things were not as they should be, but they would not always be this way, Messiah was coming. He would sit on the thrones of the house of David. He would not only rescue them, but redeem them, He would make all things right and He would make peace.

That leads to the command so many of us know and the prayers that we have prayed, “Pray for the peace of Jerusalem!” The interesting thing is that the psalm actually tells us not just to pray, but what to pray, “May they be secure who love you! Peace be within your walls and security within your towers!” In the day that David wrote this, the prayer was simple, pray for Messiah to come. Today, the prayer is just as simple, pray for Israel to know her Messiah.  As we just recently talked about, there is no true peace outside of Jesus, so our prayers for Israel, for the peace of Jerusalem are not political, financial or geographical, they are eternal and redemptive. Our prayers are not that her enemies would stand down, but that the veil would be removed from her eyes, that God’s chosen people would choose God’s only begotten Son as their Savior, Redeemer, Messiah and King.

That brings us to the last verse of the psalm, “For the sake of the house of the LORD our God, I will seek your good.” The only true good, the only true prosperity is God’s will. David closed by saying, not individually, but again, together with those who were gathering to go to God’s house, that for the sake of God’s house, they would seek Jerusalem’s good. In other words, for God’s glory we will seek God’s will. He wills that none would perish (II Peter 3:9), He desires that all would be saved (I Timothy 2:4), He came to free us from our sin, He is returning to gather us to Himself. Just as Israel gathered to corporately remember that the Messiah was coming, we should gather to remember and remind that Jesus is coming again. We should gather to cry out “Hosanna!” or “Save now!” we should gather to give thanks for what God has done and to stand in firm hope of what God has promised to do, we should gather and pray for souls to be saved in Jerusalem, Judea, Samaria and the ends of the earth. Worship is not when we come together to each get what we need from God, it is when we gather together to give God all we have because it is all come from Him and is all for Him. Worship, fellowship, intercession, they have been given to us so that through them God can lead others to Him. Be glad. Be together. Be bold. But most of all, every time we come together, may Jesus be glorified, and souls be redeemed in the house of the LORD, in God’s chosen people and in every tribe, nation and tongue. God’s promises are not about the things He will do in our lives, but how He will use our lives to give eternal life to others.