Skip to main content
Posted by Abie Kulynych May 21, 2020 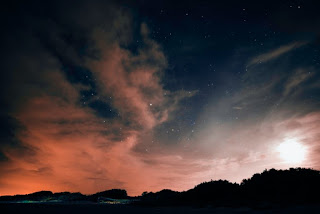 Personification is attributing human characteristics to nonhuman things. We might say “the sun was smiling on us today” or “that piece of cake was calling my name”, it is a figure of speech that often applies our emotion to the inanimate cause of those feelings. While God is not human, He is the source of our humanity, we were made in His image, we exist in His likeness and all that makes up our fabric comes from His being. But He is not like us. We are fallen. Even if we have been redeemed by the blood of Jesus we are still tainted by the stain of sin and the sting of death, even while we are sanctified there is a residue of sin that is continuing to be cleansed. I believe that is what is promised in I John 1:9, “If we confess our sins, he is faithful and just to forgive us our sins and to cleanse us from all unrighteousness.” Forgiveness and cleansing, one happens immediately, the other is worked out and worked on over time, in a process. We were made in God’s image, stained by sin, redeemed by Jesus’ blood, and now being conformed back into the image from which we were created (Romans 8:29). It could be said that we are like God, but He is not like us. Often our struggle is thinking that God is like us. In Psalm 50:21, God rebuked the wicked, who assumed that since God had not condemned them that they were safe from Him, telling them, “you thought that I was one like yourself.” In our case, we tend to struggle with thinking that God is like us in the negative sense, we expect Him to be harsh, anticipate Him to be angry, wait for Him to disappoint. Even though we know that there is no sin in God, and He has never sinned, we expect the things that sin has caused in us to somehow be found in Him.

This is where the author of Psalm 83 begins, “O God, do not keep silence; do not hold your peace or be still, O God!” Israel was once again in trouble. The psalm reads of enemies, conspiracies and a plan for annihilation (“Come let us wipe them out as a nation”). Names are named as countries came together to combine their strength against Israel’s weakness: Edom, the Ishamalites, Moab and the Hagrites, Gebal and Ammon and Amalek, Philistia, Tyre and Asshur. Israel did not have one enemy or one problem, they were being buffeted on every side, they were about to be overwhelmed. In this the psalmist cried out to God, but in crying out for help we hear that he feared the worst. He equates his trouble with God’s silence, that his conflict is somehow because God is holding back, that his enemies are coming for him because God has moved from him. There are two questions that I hear between the lines of verse 1, “What did I do to deserve this?” and “Why are you letting this happen to me?”

Don’t we seem to sway toward those questions when trouble comes, at least at the beginning of our trouble? Trouble makes us forget, even if just for a moment, if not who God is, what God is like. We cry out “Where are you?” when He is promised to be with us always. We wonder aloud if He is listening when Jesus said at Lazarus’ grave, “I knew that you always hear me.” We expect from God what we have received from and given to others. To go back to Psalm 50:21, we think that He is like us.

On the Day of Pentecost, in Acts 2, the crowds said that they heard the first believers “telling in our own tongues the mighty works of God.” We are good at reminding each other of what God has done, we need to get better at telling each other, even ourselves of who God is. It is not that Israel’s situation was not overwhelming, but God was listening. It was not that the threats were not real, but God was present. It was not that war was not imminent, but God was working. I think these three truths about God, that He is always listening, present and active are the three things that our enemy attacks the most when our hearts and our faith are being tested. Attacks of the enemy or trials of life are not signs of God’s lack but opportunities for our faith to grow.

Jesus said, in John 16:33, “In the world you will have tribulation. But take heart; I have overcome the world.” We often quote that statement just as I did, but that’s only part of what Jesus said, the first part of the verse is vital to our understanding and the action of taking heart, “I have said these things to you, that in me you may have peace.” Our peace will never come from God’s action, but it can always be secure in His character. Jesus promised trouble, or tribulation, but He also told us how to fight back in it, “take heart”. What does that mean? Jesus had used very similar language earlier in the night when He told the disciples, “Do not let your hearts be troubled.” I believe He then told them how to do that, “You believe in God. Believe also in Me.” We “take heart”, we lead our hearts, we “Do not let our hearts be troubled” when we believe in Jesus. That sounds simple, but it is not. Biblical belief is not mental or verbal assent, it is complete surrender. Believing in Jesus means that we trust who He is even when we don’t understand what He’s doing, it means that we stop waiting for the other shoe to drop and train our hearts to remember that He is our Shepherd, that we actively battle our tendency to fear the worst and proclaim the truth of God’s promise that it is His good pleasure to give us His kingdom.

None of us will ever understand everything that God does, in fact, there will be plenty of things that we will not like or even agree with. He made that clear in Isaiah 55:8, “For my thoughts are not your thoughts, neither are my ways your ways”. But we can be sure of His character. God is love. God is good. God is faithful. His mercy endures forever. His promise is that He will never leave. He will not always hold back trouble, but He will never hold back His love and we will always be held. He does not ever hold His peace, but He always holds His children. Do not allow the emotions of tribulation to raise questions about God’s character. Find your peace in who He is and tell yourself what you know to be true: God is listening, God is present and God is working.
Email Post