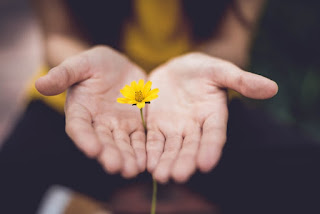 Psalm 74 began with the question, “O God, why do you cast us off forever?” Psalm 75 begins with a declaration, “We give thanks to you, O God; we give thanks for your name is near.” While the Psalms were not written in the order we have them, they were arranged with purpose. Just as quickly as the Psalms seem to change tenor, so can our feelings, our hearts and even our responses. The God who felt far off in Psalm 74 is exalted as near in Psalm 75, it’s not God who moved, it’s perspective that changed, it’s remembrance at work. Psalm 75 shows us that we may not be able to choose how we feel but we can decide what we give.

While the previous psalm started with questions, this psalm begins with a declaration, “We give thanks to you O God; we give thanks for your name is near. We recount your wonderous deeds.” I don’t believe it’s ever wrong to ask questions, but I think we sometimes forget that even while we have questions, we can choose action. What does it mean to give thanks? The Hebrew word used in Psalm 75:1 is “yadah”, it’s literal meaning is quite interesting, “to use (i.e. hold out) the hand; physically, to throw at or away . . .” To give thanks is an action, it requires effort. How often is “thanks” merely something we say, a word that rolls from our lips without having any connection to our heart? How often do we say “thank you” out of being conditioned or having an obligation? This psalm is not about saying “thank you” the moment a gift is received but the effort of giving thanks in all things and at all times.

Asaph wrote that he gives thanks to God because His “name is near”. God’s name is His character, His reputation, what we know of Him and what we make known about Him. We tend to struggle with God’s presence. He has promised that He is with us always, but sometimes we don’t feel Him. He said He’d never leave us, but we have moments when He doesn’t seem near us. We like tangible assurance. We love signs and feelings, but the nearness of God’s name is wrapped up in who we believe Him to be. There are times when God does undeniably good things and we respond to His action. But then there must be times when we struggle to see the goodness of what God is doing and we do the action of believing in Him and giving thanks for who He is and what we know. It’s easy to give thanks after we walk through the Red Sea on dry ground; but giving thanks when God humbles us and allows us to hunger, so that He can teach us that we don’t live by bread alone but by every word that proceeds from His own mouth, that is a thanksgiving that takes effort.

When we remember who God is, when we are thankful for His character, that His name is near, it leads us to “recount” His “wondrous deeds”. There is something about acknowledging God’s character that leads us to remember His works. Psalm 74 asked God to remember Israel, but Psalm 75 teaches that when we choose to give thanks it creates remembrance. Let’s be honest, we have all forgotten God’s goodness at times. There are moments when we panic, not only because of our circumstances but because, in our circumstances, we forget that we know God is good. That’s where the effort of giving thanks comes in. Give thanks when we don’t feel like we have it to give. Give thanks when we would rather receive a gift. Give thanks along with tears. Give thanks in pain. Give thanks while suffering loss. I Thessalonians 5:18 says “give thanks in all circumstances”. We so often ask God to work in our lives, His Word is asking us to work to give thanks.

There is a beauty in this psalm that I don’t want to miss, when Asaph gave the effort to give God thanks, God spoke. God interrupted the psalm, He became a speaker rather than a listener, their thanks moved His heart. He said, “At the set time that I appoint I will judge with equity. When the earth totters, and all its inhabitants, it is I who keep steady its pillars.” We don’t know the circumstances or the timing that surrounded the writing of this psalm. God’s response shows us that it must have been a time in which Israel must have been looking justice so God assured them that it would come in His time, that it was in His hands. But God’s second sentence is the one that is truly amazing. “When the earth totters . . . it is I who keep steady its pillars.” No matter where we are in our lives, no matter what is happening in our world, there is nothing shaking that is not meant to shake. There are things that get built up and things that we build that don’t belong and so God, in His kindness and mercy, shakes our lives, shakes our world so that those things that should not be fall away, but a the same time God holds steady everything that belongs. This is such good news, nothing that is meant to stand can be shaken and nothing that can be shaken was meant to stand.

And so, in the midst of it all, we give thanks. We do the work of believing in the One whom the Father has sent (John 6) and we stand confidently even when we shake with everything else. The world might shake but the pillars won’t fall, and here’s the greatest reason for thanks any of us will ever have, the One who holds the pillars has taken hold of us and He will by no means let us go. He has chosen us, let’s choose to do the work to give thanks.
Email Post