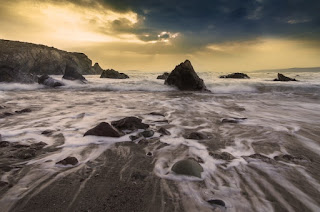 It’s interesting that one of the most disturbing events recorded in Scripture created one of its most beautiful songs. David, described as a man after God’s own heart who would do everything that God desired of Him, sinned. He sinned miserably. At the height of Israel’s glory, when David was his most popular and most powerful, when kings went off to war, David decided to stay in Jerusalem. The man whose heart was after God’s chose to follow his own and discovered that our hearts, when outside of God’s leadership become deceitful in all their ways. At some point while his men were at war and he was at home, David walked on the roof of his home and looking down at his kingdom, saw a beautiful woman taking a bath. We don’t know if David’s relationships had become difficult, if he had become weary from fighting temptation or if he had just become bored, but when he saw this woman, he abused his power, and sent his servants to bring her to him. I Corinthians 10:13 tells us that in God’s faithfulness, whenever (meaning every single time) we face temptation, God provides a way of escape. David’s story was no exception. When he told his servants to bring him the woman, they asked him, ‘Is not this Bathsheeba, the daughter of Eliam, the wife of Uriah the Hittite?” The king’s servants didn’t have the power to deny him, but they were brave enough to question him. God gave a servant enough courage to question the king because God always provides a way of escape. God’s faithfulness to our hearts, to our purity, to our not allowing sin to destroy our lives and the lives of others is far greater than we know or give Him praise for.

David ignored the question, refused the way of escape and sent for Bathsheeba, committed adultery with her and then sent her home. We don’t know where David’s mind or heart was at after his sin, but what happens next tells us there had not yet been any repentance. Bathsheeba conceived and sent word to David that she was pregnant. At that point, David didn’t move to confession but cover up, he was not yet sorry for his sin, he was afraid to get caught. There is a tremendous difference. He sent word to the commander of his army, Joab, to send Bathsheeba’s husband, Uriah, home from the battle. I think it matters to the details of the story and the Psalm to understand that Uriah was not just some soldier. He was one of David’s chief warriors, one of the 37 “mighty men of David” described in II Samuel 23. He was brave and loyal, he was not just known to David, he was possibly a friend of David. David’s plan was simply to cover up his sin, then no one would know, and no one would get hurt. I imagine that David probably thought making the problem go away was the same as being sorry for his sin. David met Uriah and asked for a report from battle and then told him to go home. His hope was that he would go home, enjoy his respite from battle, sleep with his wife and then the child she was carrying would be assumed to be her husband’s. The problem was that, in this particular season, Uriah was more devoted to David than David had been to his men. Uriah refused to go into his home. He slept on the doorstep of David’s house with the servants. David questioned him and Uriah said that he would not go home, eat from his table and sleep with his wife while his brothers were still off at war. Sadly, his loyalty did not convict David, it caused him to panic.

The next day David called Uriah to eat with him. David got him drunk, hoping that then, in that state his resolve would be weakened, and he would go home to his wife, but he didn’t, Uriah simply slept on the couch with David’s servants. Seeing that he would not be able to use Uriah to hide his sin, David wrote a message to Joab, the commander of the army, and asked Uriah to deliver it. The message read, “Set Uriah at the forefront of the hardest fighting, and then draw back from him, that he may be struck down, and die.” David’s heart had become so hard by the sin he was hiding, that he no longer valued anything other than his own reputation, even the life of his friend. Joab did what David commanded, Uriah was sent to the front lines and then when the battle became it’s most fierce, everyone pulled back and allowed Uriah to be killed. A man of valor, of honor, of devotion and loyalty, killed because of the secret of someone else’s sin.

After Uriah died, Bathsheeba mourned for him and after the time of mourning was over, David brought her to live in his house and married her. An act that many probably thought was a sign of his loyalty to Uriah, caring for the widow rather than a selfish act to cover up his sin. The last verse of II Samuel 11 tells us the truth about every part of this exchange, “But the thing that David had done displeased the LORD.” The true danger of sin is not how it affects our lives, but how it displeases God. If our reasons for avoiding sin or our sorrow over sin is about how it affected us or those around us, we are not yet ready for repentance, because true confession and change come from seeing God’s kindness toward us even when we have grieved His heart.

David went about his life as if it had all worked out. We don’t know, maybe he had made a deal with God that this would never happen again. Maybe he believed that God had allowed this to be covered up as some form of grace. Maybe he was even more proud than ever thinking that his power as king kept him from being rebuked even when he was wrong. But God will not rest in His displeasure, if we will not respond to His conviction He will come in confrontation. God sent Nathan to David to tell a parable that paralleled his own sin. As David listened to the prophet, he became angry, he couldn’t believe that anyone could be so selfish, so reckless, so arrogant and abusive. As Nathan came to the end of his story David shouted out, “the man who has done this shall surely die!” And Nathan responded, “You are the man!”

Psalm 51 is David’s response to the displeasure of God. I don’t know if it was immediate. I would think that hearing God’s displeasure the way David did, in detail, hearing that his sin had never been hidden, that God had been watching and grieving all along must have been overwhelming. The Psalm probably took some time to be felt, to be sorted out, to be written and sung. But what we do know is that when David was confronted with his sin, he didn’t explain it like Saul did, he didn’t hide it like Ananias did, he didn’t harden his heart like the Pharisees did and he didn’t make it about himself like some of us have done, he confessed, he repented, he wept and put himself back in God’s hands. In the Psalm David first confessed his sin and cried out for mercy. He acknowledged how deeply he had rebelled and how the only thing keeping him alive was the character of God. Then, he spoke a line that we are all familiar with, but I hope we will wrestle with today, “Create in me a clean heart, O God . . .” The Hebrew word that David uses here is the same one that is used in Genesis 1:1 to tell us that God created everything out of nothing. I believe that David had come to believe something very strongly, he had nothing to offer God. There was no part of him that was salvageable, that God should work with to make better. David realized that it had been his heart that had deceived him, that his sin didn’t start when he saw Bathsheeba, or even when he stayed home from battle, it started in his heart. A.W. Tozer once wrote, “You can blame circumstances, but backsliding always begins in the heart.” David came to realize that the displeasure of God cannot be absolved by making things appear right. Sin must be confessed, change must be chosen and a new heart must be created.

There is still a lot in me that needs to change, you might be the same. There are attitudes, ideas, beliefs, personality traits, and so much more that God is giving me the grace to have changed, but none of it matters if my heart is not first made new. That’s what God revealed through Ezekiel, that He would remove our hearts of stone and give us hearts of flesh. It’s what Jesus was telling Nicodemus when He said, “You must be born from above”. It’s what David was praying in Psalm 51, don’t just change my heart, create a new one, create one that isn’t scarred by my flesh or tainted by this world. He realized that he didn’t need a renovation, he needed a reconstruction, it wasn’t enough to be better, he had to be new. Today, as I write this I’m aware that there are parts of me that I’ve held onto for far too long. Things that I thought could be worked with or worked around, that I hoped could be set aside and then, later, when I’m in a better place I could pick them back up. All of these things are me trying to keep my heart when God won’t settle for anything other than creating a brand new one. If you are in a similar place to me or maybe even in a place like David was, I encourage you, don’t try to fix your situation, don’t try to cover your sin, don’t try to hang onto what you hope to save, put everything in God’s hands and pray with me and pray with David, “Create in me a clean heart . . .” Don’t use what I’ve got to offer, cast all that aside and make me like You.
Email Post