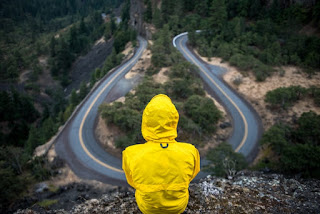 Psalm 49 concludes the first collection of songs and poems by the Sons of Korah. It’s an interesting psalm in that it speaks of God but does not at any point speak to Him. It’s audience is not even Israel as so many psalms are, rather this is a message for “all peoples” for “all inhabitants of the world.” What’s the message of the Psalm, this “word” that everyone on earth, “both low and high, rich and poor” need to hear “together”? As morbid as it may sound to us, the message is that man, no matter his wealth, his fame or his honor will not remain, he is destined to die, there is no way to create a place of lodging for ourselves on earth.

Verse 12 says, “Man in his pomp will not remain; he is like the beasts that perish.” The Hebrew word that is translated as “remain” in the English Standard Version is “luwn”, it means “to lodge, stop over, pass the night, abide”. The point that I believe is being made is to stop working to be comfortable in a place that was meant to be temporary. Jesus asked a question that I believe fits well in the message of the Sons of Korah, “For what does it profit a man to gain the whole world and to lose his soul?” The question was not so much about where we go when we die but what a waste it is to spend our lives on things that won’t last and in the long run, won’t matter. This is where we need to look closely not at what matters in life but what life really means.

Most of us have a longing to belong, a desire to be accepted, a need for roots and a drive to find our place and become comfortable. What if none of those things can be fulfilled in this time or place? Paul wrote that our citizenship is in heaven and that we are pilgrims and strangers here. That means we aren’t meant to find our place, because it’s not here. That means that discomfort in this place is not only what we should expect, it should be what we desire. I don’t ever want to fit in where I don’t belong, I don’t ever want to make my home in a place that I was only supposed to pass through. I don’t ever want to get comfortable with something that was designed to make me long for more. It’s not that God doesn’t want us to have our needs or desires met, but He designed us to find our fulfillment in Him. That means we were created to live in dissatisfaction in this life that drives us toward true fulfillment in the life and age to come. This is why Paul could write “For me, to live is Christ, but to die is gain . . . So what shall I choose? I do not know.  I am torn between the two.” Life in this place, in Christ, is a gift, but it is also the motivation for what comes after this place, life with Christ.

Abraham is called the father of not just our faith, but faith itself. We know about his obedience in leaving his country and his family, about God’s miraculous provision of Isaac, the child of the promise, in his old age and barrenness and his willingness to sacrifice Isaac back to God simply because God had asked. The part of Abraham’s faith that we talk of far too little is the life he lived in constant discomfort. Hebrews 11 says, “By faith he dwelt in the promised land as a stranger in a foreign country . . . For he was looking forward to the city with foundations, whose architect and builder is God.” The will of God, even the promise of God was an uncomfortable place for Abraham to live. He left his family, his country, his reputation and his way of life. He was wealthy, but he was a stranger, a foreigner with no claim to anything in the places he lived. Abraham knew what it was to be different, to be lonely, to be unwanted, to be scrutinized, even to be labeled and diminished for his nationality and race. All this happened in the will of God, we could even say much of it happened because of the will of God. But what we are told is that Abraham’s faith caused him to endure it, to push through it and to understand it for what it was. He lived here but he longed for there. He thanked God for where he laid his head, but he never allowed that place to capture his heart. He chose to be uncomfortable in the now so that he could be committed to what God promised would come later.

The Sons of Korah knew we needed to hear the truth that Abraham had lived, this is not where we belong, pass through because there is a better place, with better promises and greater joys on the other side. But if I may, this is not talking about “when we all get to heaven”, it’s referring to when Jesus receives His glory, when we see Him and are suddenly made like Him, when the perishable gives way to the imperishable. This all points to the second coming of Christ, the age to come, Day of the LORD, the moment when all knees bow, every tongue confesses, and Jesus takes His rightful place as the King of Kings and Lord of Lords. The discomfort we feel in this life is not about us, it’s about this fact, Jesus is not yet receiving what is due Him. Don’t search for comfort in a world that doesn’t know Jesus as Lord. Don’t try to find acceptance in a place where Jesus is being rejected. Don’t choose to belong in a place where Jesus is not preeminent. Let’s pitch our tents on earth and press on toward that day when God builds His house and welcomes us into His place of dwelling. This is not where we belong, but it’s how we get to where we have always wanted to be.
Email Post