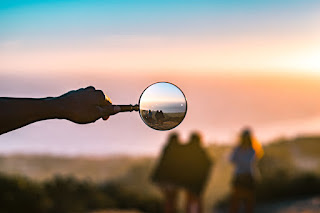 When Jonathan warned David that King Saul was going to try to kill him, David didn’t know where to go, but he knew he had to leave. I Samuel 21 tells us that David left Israel, I’m sure he left in fear, in disappointment, in sadness and probably in a bit of confusion. David was the greatest warrior in Israel, the women and children sang songs about him. He had been the one person that God had used to play his harp and settle the tormented soul of Saul. He had been anointed to be the next king of Israel. How did he end up being the one that had to run for his life? How did he get there? We’ve all had similar thoughts and while probably not as dramatic as being wanted for execution by the king, we’ve all been in similar places where nothing is as we expected, nothing is as we deserve, nothing is as God had promised. What do we do, where do we go in those moments? David ran from Israel, he had to, but in his fear of Saul he did a curious thing, he ran directly to Israel’s greatest enemy, to the king of the Philistines. It was as if David’s sudden fear of Saul took over his thinking, he was so intent on getting away from the bad situation that he gave little thought to the situation he was running toward. It seems that for a moment, David forgot God’s goodness, distrusted God’s protection and decided he had to take care of himself. We’ve all been there, we’ve all done it, we’ve all allowed the current situation to get bigger than God’s continual goodness. We’ve all been afraid, and, in our fear, we’ve all run to a place where we didn’t belong.

Psalm 34 is the psalm that David wrote after his encounter with Achish, the king of the Philistines. The encounter recorded in I Samuel 21 seems to tell us that David went to men in Gath, the stronghold of the Philistines and asked them to take him to the king. Once David was in front of King Achish, (just so there is no confusion, Psalm 34 refers to Abimelech as the king David encountered. It seems that Abimelech was the throne name, while Achish was the king’s personal name, much like the use of Herod or Caesar in the Roman period) the king realized that he had Israel’s greatest warrior in his presence, that capturing or even killing David would be a great victory for the Philistines. David became afraid, in my mind, he realized that rather than trusting God, he had gone his own way, rather than remembering how God had ordered all his steps, David forged his own path. It seems that David suddenly realized that he had allowed his fear of Saul to become greater than his trust in God. In running from Saul, he forgot to run to God, even more, he forgot that God was always running with him.

David had feared Saul and now, suddenly he was afraid of Achish. I Samuel says that David “changed his behavior”, he pretended to be insane, clawing at the doors and drooling on his beard. Achish changed his mind, having David was no victory at all. He said he already had all the “madmen” that he needed and told them to take David from his presence. David was again and this time, rather than running to another king for help, he went and hid, alone with God and waited for the One who could always be trusted to lead the way.

Psalm 34 has one line in particular that I believe shows what David learned from this experience. In verse 3, he wrote, “Oh, magnify the LORD with me . . .” Generally, when we think of the word “magnify” we think of making something larger, but magnification is much more about clarity than size. God is already great, we aren’t being called to manufacture His greatness, we are being called to look more clearly, to remove the distractions. The Hebrew word used here means “to grow up, to make great”. David is calling us to join him in making God great in our eyes, to give Him room to grow in our hearts, to settle our gaze upon Him by turning it from everything else. David recognized something in his experience with Achish, he had magnified Saul’s threats and the emotions that they raised in his heart. He had given the circumstance more attention than God’s promises. He had trusted his fear more than God’s character. He had given room to the moment rather than trusting that the moment was in God’s hands. David realized that if he had been magnifying God, he would have never faced Achish.

How many things are we facing today simply because we made the moment bigger than the One who holds all our moments? How many times have we given the feelings more room than the promises? How often have we let fear lie about God’s love, have we run with anxiety rather than holding on to God’s character? David did it, I’ve done it, I’m pretty sure you have as well. Yesterday I was praying with a friend. We were thanking God for His recent provision in both of our lives when she prayed, “You are continually providing”. Those words struck my heart, in fact, I had to stop praying and write them down. I often think of God’s provision as past or future, He has provided and there are things that I’m still in need of Him to provide, but she pointed me to the reality that God is continually providing. David ran to Achish because He didn’t realize that God had already provided a cave where he could hide, rest, be refreshed and then surrounded by mighty men that would fight with him and fight for him. Magnifying the LORD does not change our situations, but it focuses our lives upon God’s character, it replaces doubt with faith, worry with security, confusion with confidence and the fear of death with the assurance of love. We don’t need smaller problems; we need a clearer view of the greatness of God. He’s with us, He’s for us and He’s the only One whose ever kept the promise to never leave us nor forsake us.
Email Post