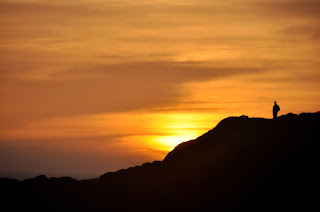 Psalm 31 begins like many of the Psalms that we have read so far, David confesses his trust in God, prays for God to rescue him from the trouble being caused by his enemies and then declares, seemingly to himself, God’s ability to both rescue from and protect in the midst of trouble. This Psalm then, for me, took a dramatic turn in verse 5, David wrote “Into your hand I commit my spirit . . .” Where have we heard that statement before? They are the last recorded words of Jesus from the cross. Luke 23:46 tells us, “Then Jesus called out in a loud voice, ‘Father, into Your hands I commit My Spirit.’ And when He had said this, He breathed His last.” These words that we find in the beginning of Psalm 31 became Jesus’ dying declaration. What I’ve begun to realize is that these words could only be spoken in death because they had been obeyed in life.

Jesus said a lot about His life while He was living it. He repeatedly spoke that His purpose was to do the will of the One who sent Him. He made it clear that His effort was not to accomplish any personal goals or fulfill His own desires but to glorify the One who sent Him. In John 5:19 He made a statement that I repeat often, but I believe should be startling to us each time we hear it, “Truly, truly, I say to you, the Son can do nothing of His own accord, but only what He sees the Father doing. For whatever the Father does, that the Son does likewise.” What we discover in this verse is not that Jesus was powerless, but that Jesus was completely submitted to the will and work of the Father. He’s not saying that He had no ability to work on His own, but that He had submitted any desire to get His own way or fulfill His own dreams. Jesus was saying that He had surrendered His opinion, His ambition and His expectation, His death could only be in God’s hands because His life had been surrendered, we might even say sacrificed to God long before.

Jesus took this all a step further in John 12:49, “For I have not spoken on my own authority, but the Father who sent me has himself given me a commandment—what to say and what to speak.” Not only did Jesus only do what He saw the Father doing, but He only said what the Father told Him to say. In a culture in which we believe that our voices must be heard, in which we have social media platforms to make sure we get our opinions out and broadcast each of our thoughts as soon as we have them, consider that Jesus said that He only said what He was given permission to say. We have the Son of God, whom the Scriptures tell us was God Himself, the Creator of everything, the King of all Kings, the Lord of all lords placing not just His Spirit in the Father’s hands at death, or even generically putting His life in God’s hands, but submitting Himself so fully to His Father that He didn’t ask for blessing for His actions, He only repeated the actions He saw from His Father. He didn’t ask for the wisdom to say the right things, He listened and only repeated what He heard His Father saying. Jesus didn’t just put His spirit in God’s hands when it was time to die, He put every moment of His life in God’s hands while He was living.

The question this raises for me today is simple, am I just trusting God for life to come or am I submitted to God in the life I’ve already been given? That simple question raises a few more complicated ones. Am I willing to do only what I see the Father doing? Do I dare surrender my voice so that I can be trusted enough to speak His? Do I want a life that is lived in complete obedience and surrender to Jesus? Am I content to live for His glory or do I really want Him to give me a bit of glory of my own? These are questions that I believe must be wrestled with because the answers determine whether we will not just live for Jesus, but if we will live like Jesus. Before we argue that we can’t live like Jesus, that somehow, He had a connection the Father that made it possible for Him but impossible for us, II Peter begins with the promise that we have been given everything needed for life and godliness in our knowledge of God through Christ Jesus. Jesus said in John 14 that, not only would we do greater works than He had done but that it would be better for us if He departed and the Holy Spirit was sent to dwell with us and in us. Jesus’ teaching took away all our excuses and it revealed the deceitfulness of all of Satan’s lies.

Trusting God in death is the overflow of submitting to God in life. Jesus’ dying words were nothing more than a summation of His entire life. As I read Psalm 31 today, I wrestle with how much of my spirit I’ve committed to God and I’m challenged by the words of II Corinthians 5, that Jesus died that I would live no longer for myself but for Him who died and was raised for me. The question is never going to be if we will be ready to die, it’s whether we’ve been submitted in life? Jesus said that the Father is always at work, my prayer today is to commit myself to join Him. He said that the Father had a commandment to be spoken, I’m praying to not just hold my tongue, but to quiet my voice, to listen to the Spirit and to train my ear to God’s Word so that when I do speak I can be sure that all I’ve shared is what I’ve heard from God. I’m praying that I won’t wait to commit my spirit to God until the day it departs, but that I’ll commit myself to Him fully now, so that every day, not just the last day, I’ll be sure that I’m in His hands and He’ll be sure that my life belongs to Him.
Email Post